8 month old, MN Netherland dwarf. Congenital malocclusion of the premolars/molars was first noted during a routine dental exam at the time of neuter at 6 months of age. The crown overgrowth was burred to correct height at that time, and only 2 months later there is significant overgrowth again.

The radiographs are interesting – it seems that there are congenitally absent upper and lower premolars/molars – only 5 upper and 4 lower cheek teeth are present. There is a marked malocclusion, with the most rostral lower teeth not occluding at all with the uppers. It is symmetrical on oral exam……

……. main concern is what will be best for long term management? …………

Personally I think that, before planning any treatment in this case, you need a much better diagnostic work-up. Your rads are very blurry on my screen, but I assume to see some pathology that needs to be checked in more detail:

– the nasolacrimal duct is extremely dilated (yellow lines); uni- or bilateral? did you flush it? any clinical signs? chronic „snuffler?“

– the last but one upper cheek tooth (M2) shows an apex elongation (retrograde growth) and there is a widened approximal space M1-M2 (which side?) (red arrows). Since there is an abnormal radiodense structure visible within the caudal part of the right orbita on the dv-view (red arrow), we might be inclined to assume a retrobulbar infection or at least a retrograde elongation of the caudal cheek teeth with a possible additional tooth deviation. Albeit the dv-view is not positioned absolutely symmetrically, I think this area looks strange and therefore should be checked in more detail. The somehow „thickened“ and unphysiologically structured caudal part of the mandible (yellow arrows) might only be the result of the asymmetrical positioning? It’s really difficult to say. Dv-views can always be easier and much better interpreted, if the neck of the animal is slightly pressed down to the table. In doing so, you can also better validate the alveolus of the first maxillary cheek teeth (P2) (see the image top left for comparison). The apex/dental body of one or both (?) first upper cheek teeth appears to be abnormally short and maybe pointed ((green arrow on the lateral view). In my experience, the antagonists of similarly altered maxillary teeth tend to overgrow intraorally since they simply react to this mostly painful primary pathology of the maxillary premolar (P2). So also in this case, the first lower cheek tooth (P3) depicts an extreme elongation of its clinical crown (long green arrow) as a consequence of insufficient tooth wear due to the painful pathology of the first maxillary cheek tooth (P2) (green arrow). This is an indication for a more thorough examination of both upper premolars and the caudal molars (M1+M2). Therefore, I would inform the owner about these initial findings and recommend a more detailed dental check-up consisting of at least four standard skull views and an intraoral radiograph of the maxilla, additionally (using a flexible digital plate). Based on the new findings a targeted therapy can be planed. Since the radiodensity within the orbita can be the consequence of a primary mandibular pathology as well, I would take an intraoral radiograph of the mandibula, too. Another possible option is a CT study. It depends on the owner (costs). 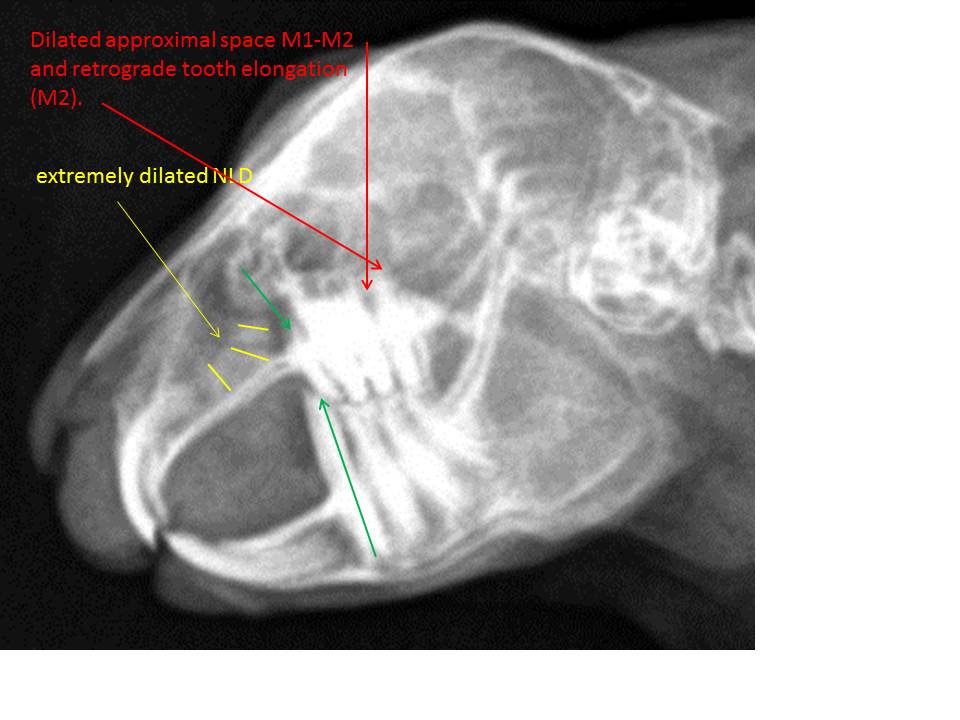 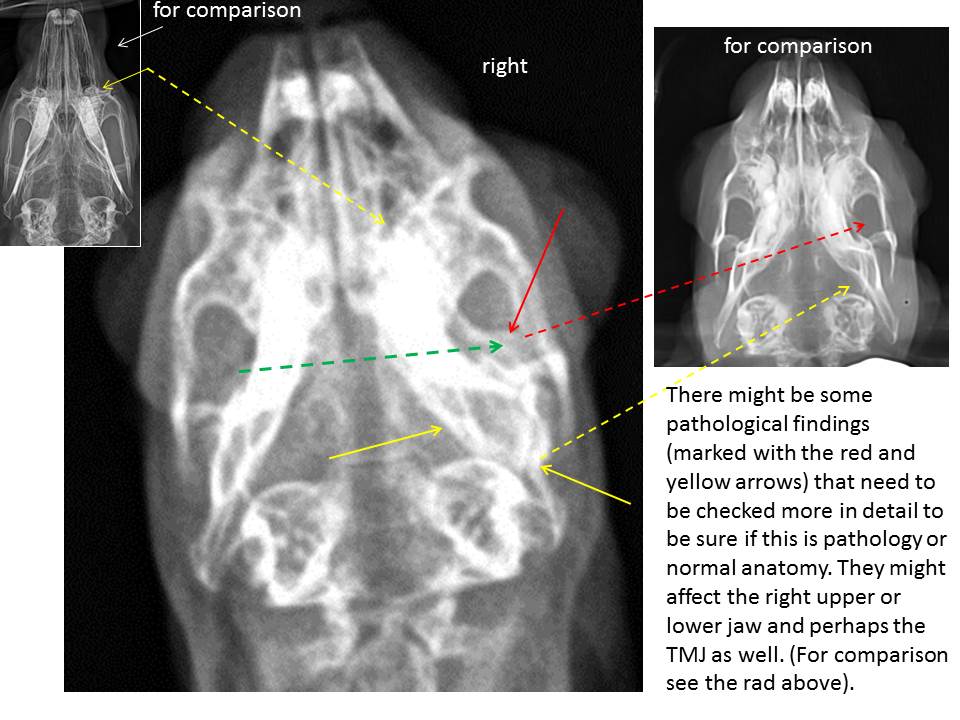