I have an almost 6 year old neutered male rabbit I saw for the first time about 3 weeks ago. He had been to our clinic in 2009 to be neutered and had not been back since. The chief concern the owner had was that the rabbit had overgrowth of the incisors.

He was still eating well despite the overgrowth, which was impressive: mandibular incisors were grown out to almost his nose and were no longer parallel to one another. His maxillary incisors were overgrown too, but those were not as bad. Mandibular CT1 was overgrown bilaterally, and there were small buccal and lingual points on most of the cheek teeth bilaterally. Rest of physical exam normal. Diet was mostly pellets and veggies (romaine lettuce, celery, carrots) and was not a big hay eater. A dental procedure was scheduled for a few days later and we discussed diet in detail, which the owner fixed immediately and the rabbit is eating far more hay with better veggie choices and doesn’t eat much of the pellets now. The dental procedure went fine – I trimmed the incisors back to normal length, removed the points on the cheek teeth, and shortened the crown on mandibular CT1 bilaterally. It almost looked as if he had an underbite, but nothing was written in the chart from 2009 about an underbite, and he had not had a problem with his teeth for 4 1/2 years. We discussed the need for frequent rechecks and likely frequent dental procedures to help to fix his mouth. He came back 2 weeks later for a recheck, and both sets of incisors were overgrown again, but not too badly. We had him back in for a dental the next day and took some pre and post procedure pictures and some quick skull radiographs (owner was not charged for the rads– I really just wanted to have a few to send with this case, so I apologize that the „lateral“ is not a true lateral). Only the incisors needed trimmed this time, and I made them just short enough that they don’t currently meet – they are about 1 mm away from touching. It appears from the radiographs that the mandibular incisors are growing at an incorrect angle – too obtuse – and not making the natural curve they need to meet the maxillary incisors at the right location. How can I fix this? I realize looking at the radiographs that he has cheek teeth changes too, and that this rabbit will likely need regular dental procedures.

Thank you for posting the images and the rads. This rabbit has indeed a cheek tooth malocclusion – as you mentioned above. And therefore this is a secondary = acquired incisor malocclusion. The main problem are the cheek teeth and an extraction of all incisors would not „help“ this animal – it’s contraindicated, in my opinion. I tried to mark some pathological findings that need further diagnostic work-up (but unfortunately your rads are very blurry on my screen) and – if possible – more targeted therapy. Only trimming the theeth on a regular basis does not seem to be enough for this poor guy. The rabbit suffers from an advanced enamel-and dentin hypoplasia (almost all cheek teeth show an abnormal dental structure that should be visible on intraoral exam as well = pathological appearance of the occlusal plane). In addition to that, multiple teeth have signs of intradental lysis. If it’s real caries or FORL-like tooth resorption cannot be assessed based on these radiographs. You need a full set of skull-rads (four views: latero-lateral for using the reference lines, dv (neck pressed down to the table), both sides oblique (head tilted about 40 degrees) and if feasible intraoral rads. Alternatively a CT study can be recommended (this depends on the owner – costs). 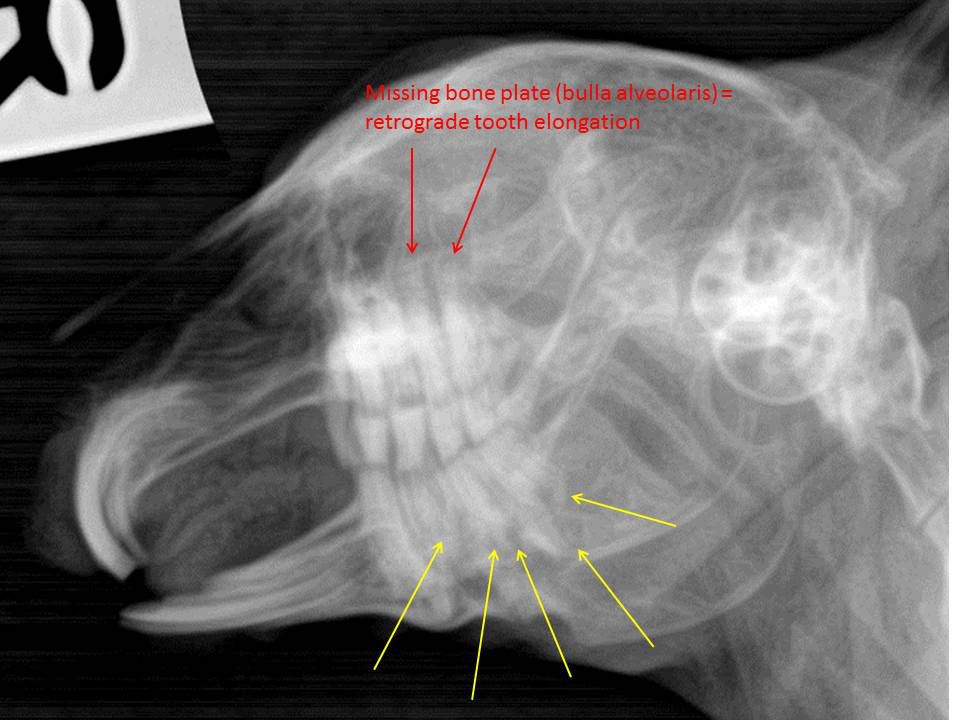 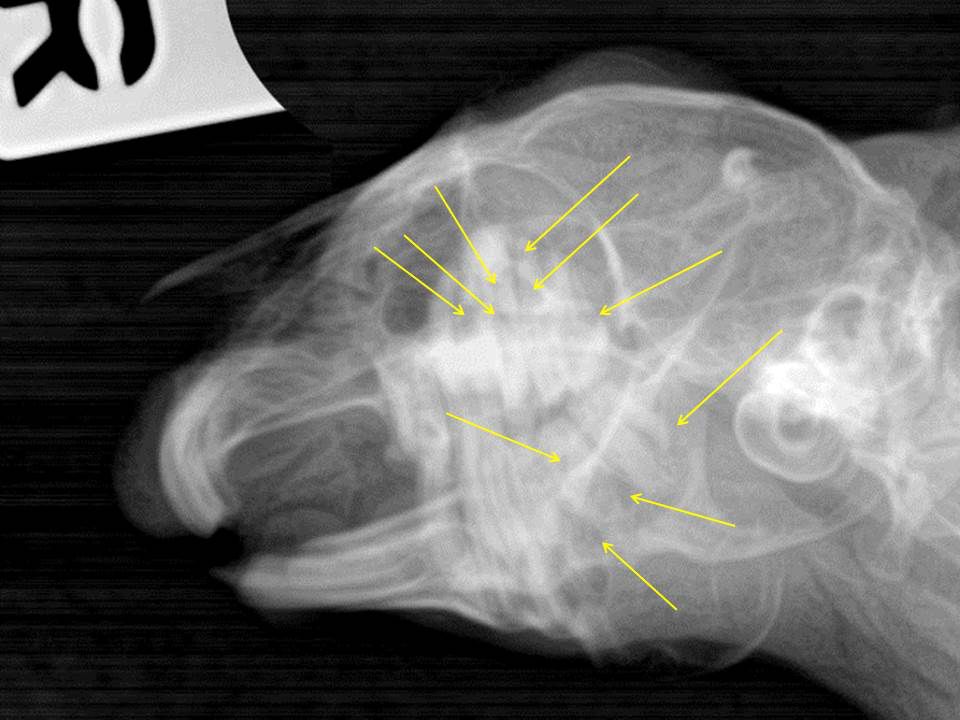